Your Nails Tell a Lot about Your Health 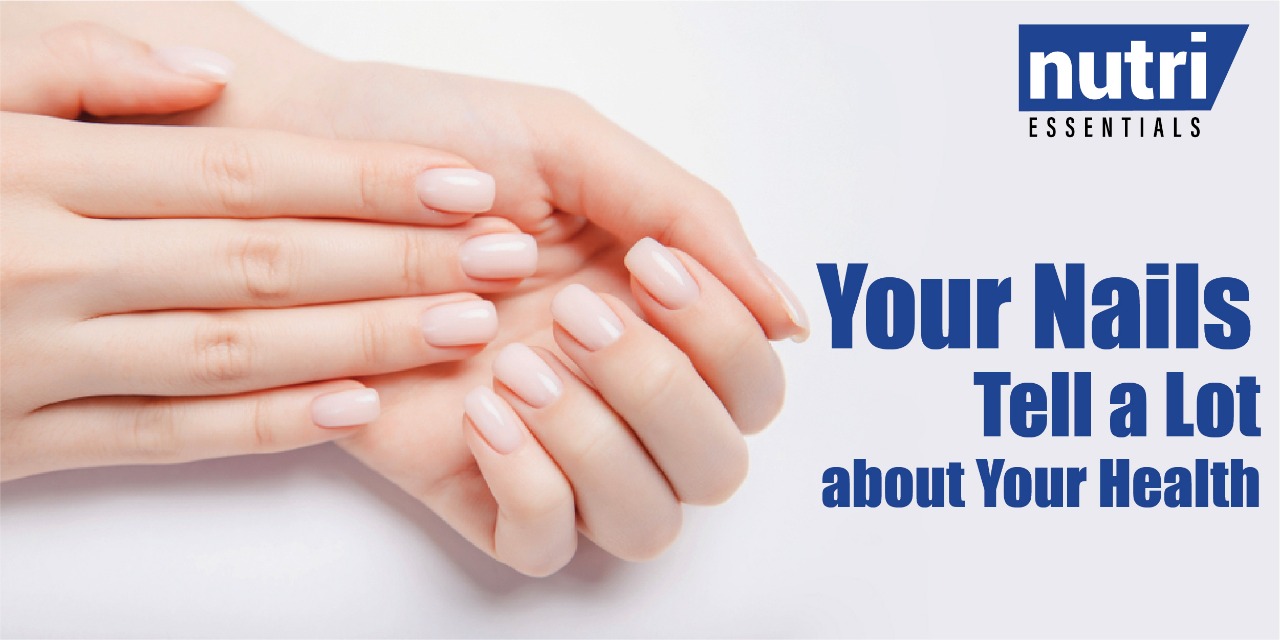 A closer examination of these tiny keratin sheets can reveal everything from a lung disease to allergy. Your nails could disclose a lot about your general state of health, so it’s becomes significant for everyone to recognize the signs of healthy nails, as well as abnormalities that could indicate a medical problem. Keep reading to discover what your nails are trying to tell you about your general physical state.

1. Pale Nails – Pale nails should always be noted. Why? Because they can indicate signs of serious illness, like malnutrition, in addition to other serious complications like congestive heart failure, anemia and liver disease. If you are above 60, then you should pay especially pay close attention to your nails, as malnutrition, heart failure, and liver disease are all common issues for older individuals. 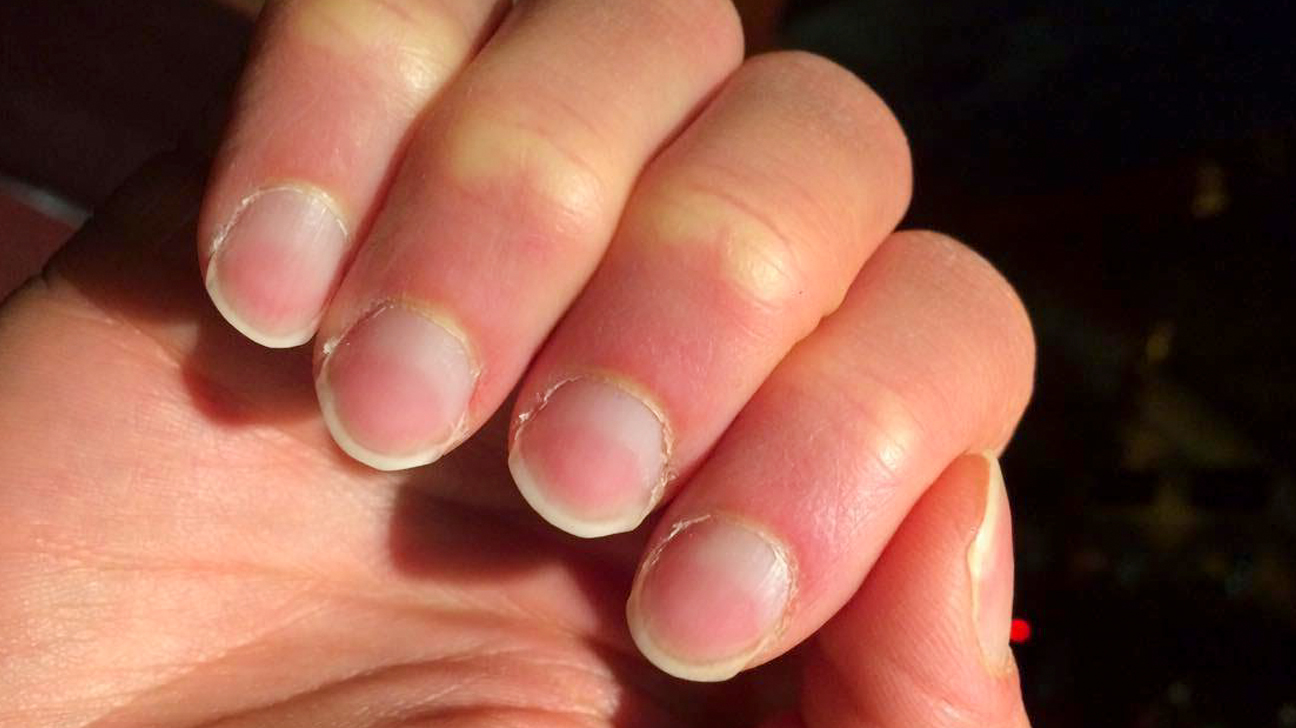 2. Yellow Nails – Nails can turn yellow for a wide variety of reasons. The most common cause is fungal infection. As the infection worsens, the nail bed might retract, and nails might become thick and crumble. But it's also sometimes due to nail lacquers or acrylic nails. If you wear acrylic nails or paint your nails too frequently and are having this problem, try taking a break from the salon and give nails a chance to recover. Another possible cause for yellowing of nails is smoking, which can stain nails and give them a yellowish hue because of the tobacco. In some (rare) cases, yellow nails can indicate a more serious condition such as severe thyroid disease, diabetes or psoriasis, lung disease. A condition called yellow nail syndrome (YNS) is indicated by continually yellow nails and respiratory or lymphatic problems. 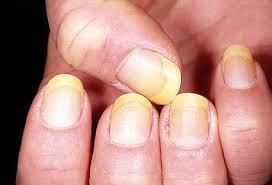 3. White Nails – Scattered white spots on the nails, which usually start appearing around middle school age, can signify a zinc deficiency. Other possible causes include:

• an allergic reaction
• a fungal infection
• injury to your nail

Also, in some cases when your nails go white, this suggests you should go to your doctor for further testing. White nails with a pink band at the top of the nail bed are called “Terry’s Nails” and they might indicate towards a serious health condition. With Terry’s Nails, the Lunia (the white half-moon area at the base of your nail) is indistinguishable from the rest of the nail. When this happens, it suggests your body’s veins have changed beneath your nail. And it may indicate diseases like – Cirrhosis of the liver, Congestive heart failure and chronic kidney failure. 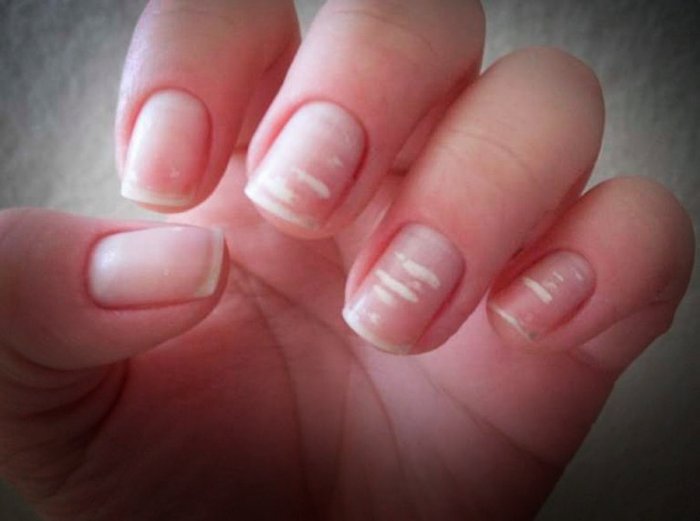 4. Bluish Nails – Nails with a bluish tint could mean that the body isn't getting enough oxygen. This could indicate a lung problem, such as emphysema. Blue nails can indicate heart problems, as well as bacterial infections, and Wilson's disease (a rare genetic disorder that causes copper to accumulate in your vital organs, according to Mayo Clinic). People infected with HIV may also develop blue nails in two ways. First, the infection itself seems to cause this distinct sign. Second, some antiretroviral medicine has also been associated with blue nails. 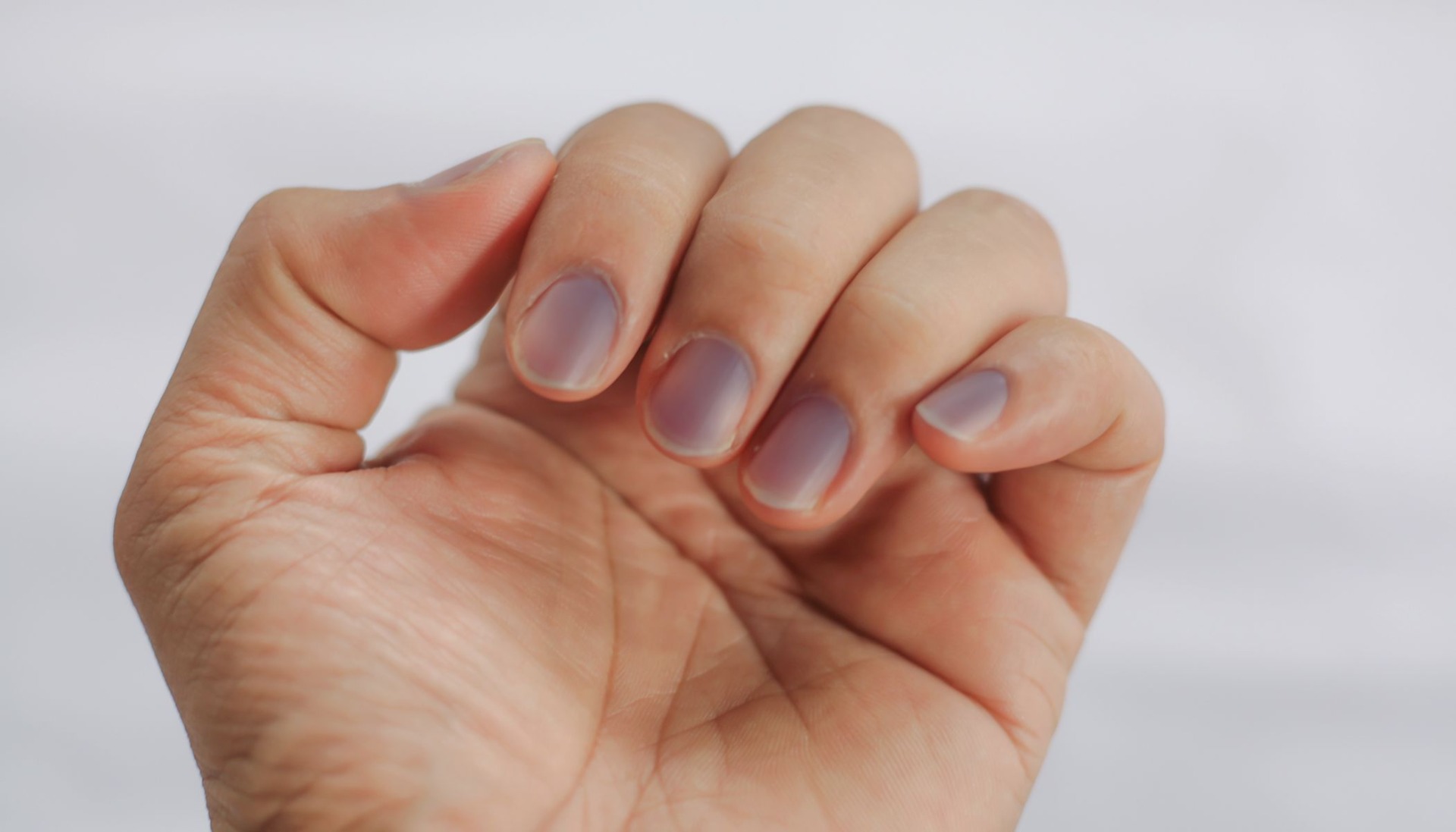 5. Brittle, Cracked and/or Split Nails – A combination of splitting and cracking nails could be due to a fungal infection and comes with a yellowish hue. And if the splitting is not related to damage from chemicals like household cleansers, it could be a sign of thyroid disease. Splitting nails may also be caused by hypothyroidism, a condition in which the thyroid gland is underactive and doesn't produce enough hormones. Nail brittleness is a common condition of the elderly. It can also be result from using drugs, a trauma to the nail, or a number of diseases or nutrient deficiencies. Officially called onychoschizia, rittle nails are usually caused by repeated wetting and drying of your fingernails. 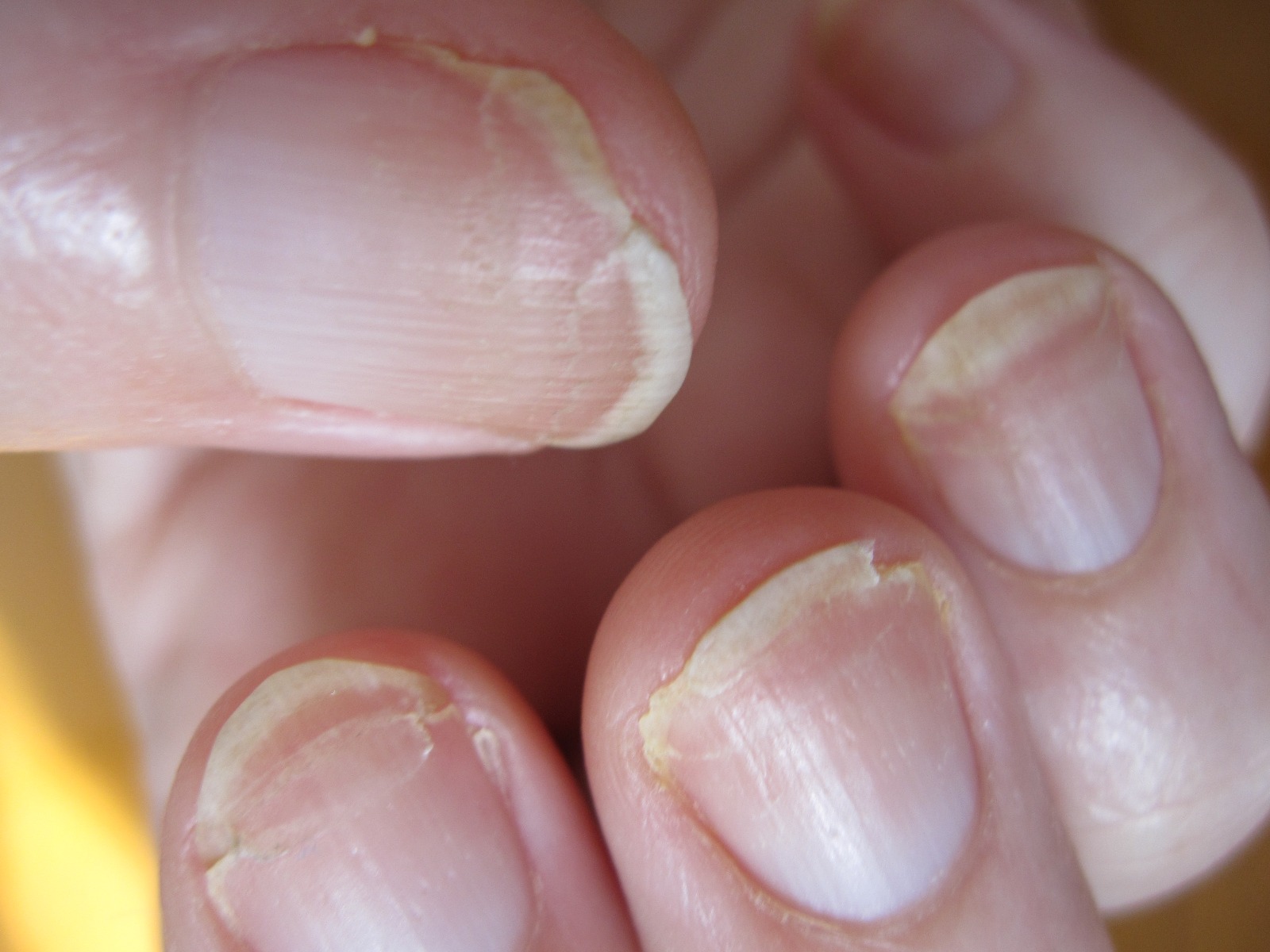 6. Puffy Nail Fold – If you observe that the skin around your nails appears red and puffy, this is known as the inflammation of the nail fold. It might be the result of lupus or any other connective tissue disorder. Such infections can also cause inflammation and redness of the nail fold. There are some other reasons for puffy nail beds, too. People whose hands are frequently soaking in water—dishwashers, food handlers, and swimmers, to name a few—may get it. People with diabetes are more vulnerable to it too, as are those who take certain HIV medications. 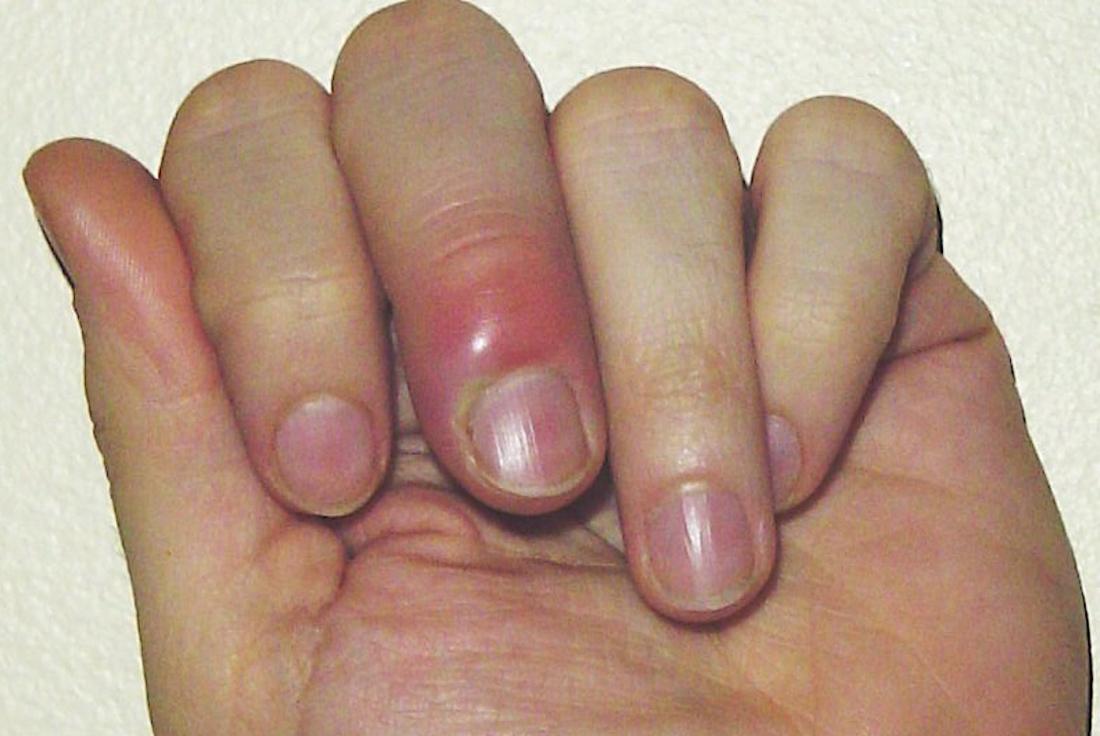 7. Dark Lines Under the Nails – Dark lines beneath the nail should be investigated as soon as possible. They are sometimes caused by melanoma, which is one of the most dangerous types of skin cancer. It is also called a splinter hemorrhage where the black lines (which can appear brown or dark red sometimes) look like splinters. They could appear multiple times. The most likely cause for the dark line under you nail is a trauma to your nail, such as accidentally slamming a door on your finger. 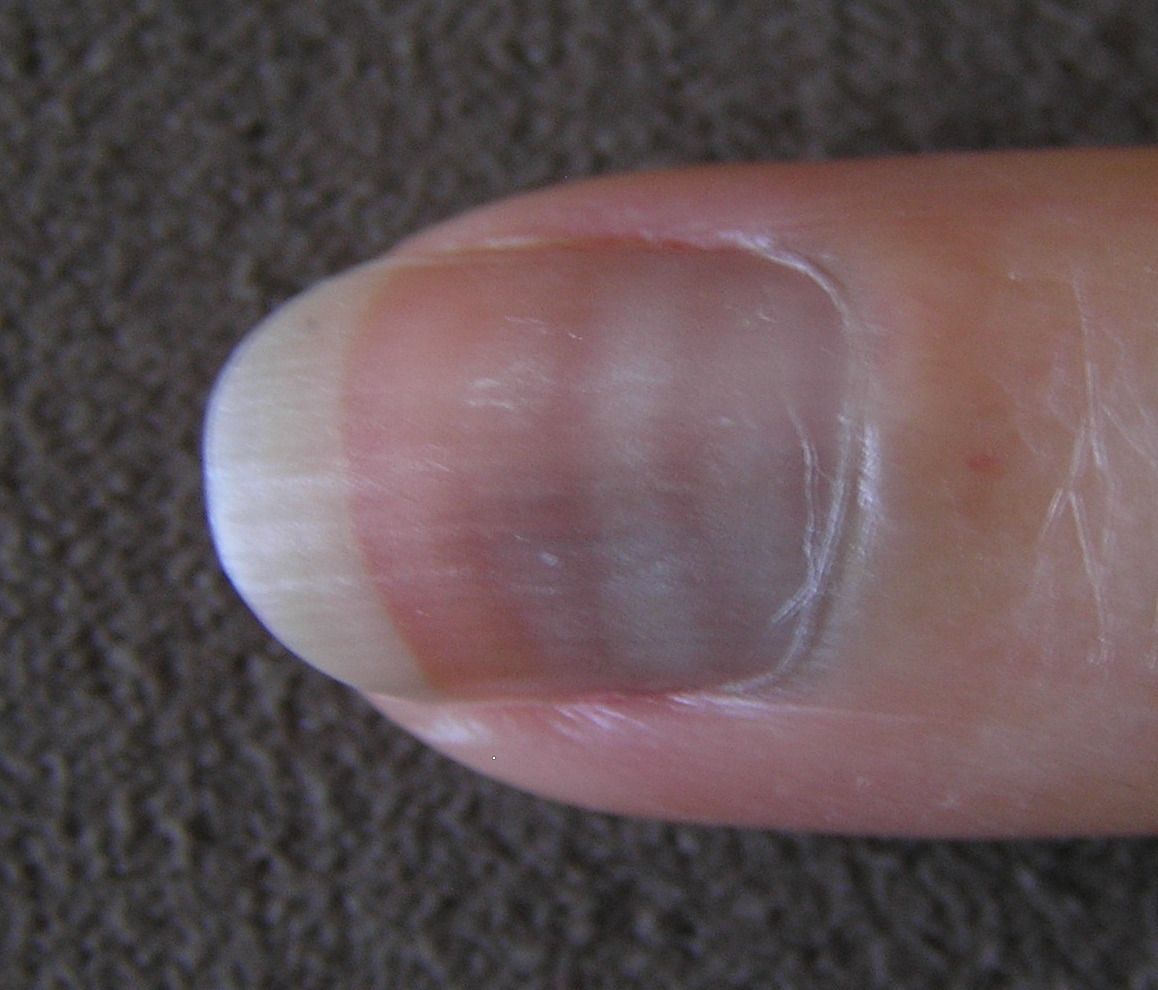 8. Clubbing Nails – Clubbed nails occur when the ends of your fingers or toes grow bulb-like. It's sometimes known as drumstick fingers can be a sign of liver or kidney disease. Sometimes Nail Clubbing is the result of low level of oxygen in the blood and could also be a sign of various types of lung disease. Nail clubbing is also associated with cardiovascular disease, inflammatory bowel disease, liver disease and AIDS. 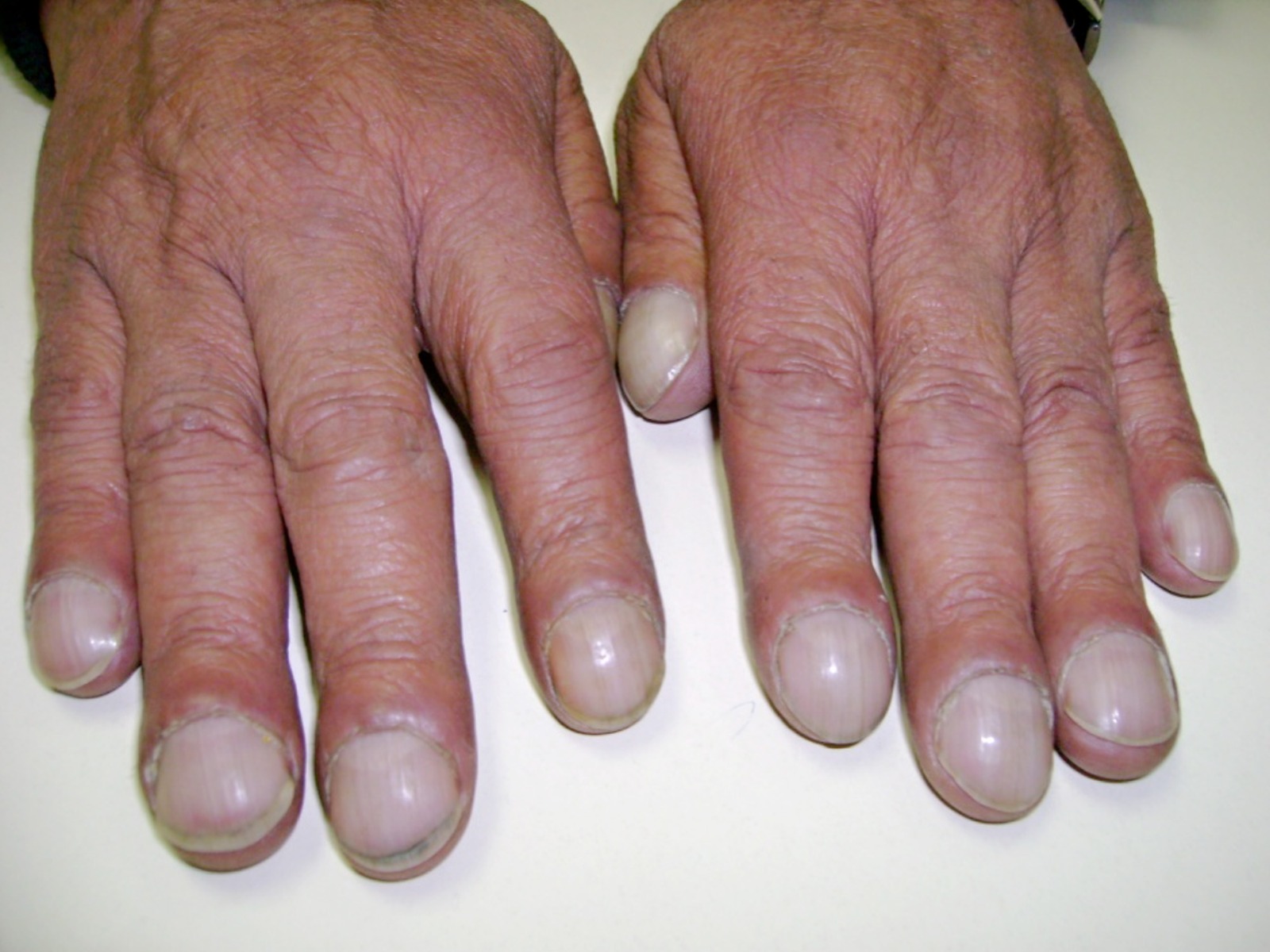